The article says that at least 27 travelers have died in 2011 tubing and partying in Vang Vieng. Actually wikipedia says 22 dead people. Such discrepancies usually mean that no one cared to check the figure. I think it is as BS as most of the article.

Vang Vieng, deep in the jungle of Laos
Vang Vieng is a four-hour bus journey on mostly dirt roads from the capital Vientiane

Both are very far from the truth. If Vang Vieng is deep in the jungle than Nam Nern (See Where the Tigers are) is on the other side of the Moon. The main roads where paved years ago and the road to Vang Vieng is a pretty big road.

Anyway. Before we arrived here, we heard rumors that the tubing was closed. Not quite true. (for the truth see the end of the wikipedia artikel).
So we just had to do it. With the kids of course. And not enough. We also booked a cave tubing to begin with.

Here is the river:

Then it started to rain and it rained the entire night and was still raining in the morning.
So we were on the verge of calling it off.
There was no way to get the money back and the rain almost stopped. So we decided to give it a try.

We were plagued by visions of sudden floods and drowning.
But they had the promised life vests perfectly fitting Ada and Lena.

The track to the elephant cave where the tubing cave is was slippery and very wet.
See the elephant? 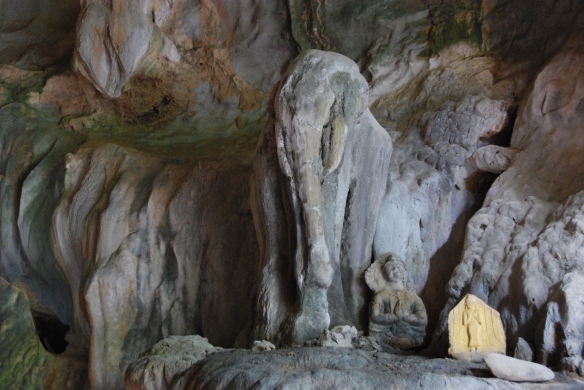 Finally only Ada and I did the tubing cave (Thamnam Cave). The Guide took Ada’s tube with his feed and pulled here into the cave followed by Papa.

The entrance is quite small but after that the cave is 1 m high and 4 m wide. Actually piece of cake, especially because the more difficult part could not be done because of high water level.
One pushes up the stream by a rope the way out is just floating.

Back to the Nam Song river (Nam actually means river) after lunch and some drive we came to the start for the tubing.
They did not have a small tube for Ada, so they constructed a seat for her with ropes.
Lena was on the Kayak with the guide.

And then they came. A Group of young chicks with beer in their hands and no life vest. Honestly though, if not drunken a life vest is not necessary for that trip. Even with some high water, it was quite harmless.

Then we glided down and had a wonderful trip.

I was not once afraid for the live of my kids. Despite all visions.