Michael is a tuk-tuk driver in Vientiane. 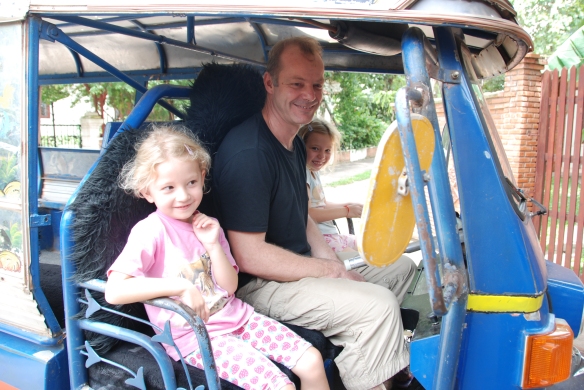 We were honored to stay in his large beautiful house with his 4 big dogs Barolo, Baghira, Taiga and Mira and a whole bunch of other animals. Heaven for the kids.
(Michael’s Wife and kids are on vacation.)
Daily highlight for Ada was the stroll by the riverbank of Mekong at 17:00.

The water level rose daily, it is rainy season, the last evening we could launch avalanches. 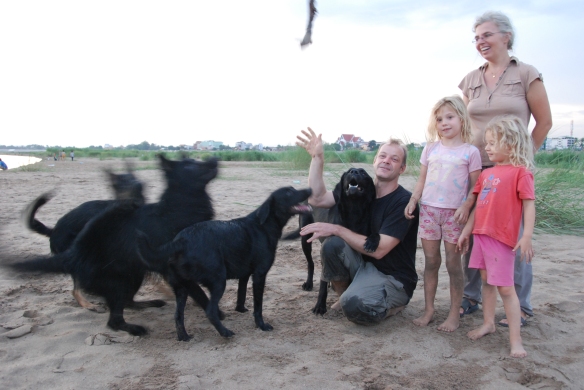 After about 2 days Ada started bossing around the dogs and they happily obeyed her. Even Lena lost most of her fear and petted here favorite, Barolo.

Of course, Michael is not really a tuk-tuk driver, he just owns one.
Many happy Thanks, Michael.

We now go to Bangkok by night train and then proceed to Koh Samui (booked until here), an island in the south of Thailand. We may also change to one of the other islands around there. After 14 days or so we’ll go back to Bangkok for a few days and then fly to Muscat for 7 days. Planned day for arrival back in Switzerland is 26. July 2013.
A year and a day.

PS: someone told me that the pictures from the riverbank look very dangerous. We were not at all aware of that. The river below is shallow and flows quite slowly. Not very dangerous.