It is not possible to visit Cambodia without a mental encounter with the Khmer Rouge.
We did not go to the killing fields near Phnom Penh, that is a touristy place and somehow did not sound just right.
Near Battambang is a killing field that is not even mentioned in tripadviser so we finally decided to go there.
It is set in a poor neighborhood with a Buddhist temple close by, in fact it was a Buddhist temple where the Khmer Rouge imprisoned many people. Not a tourist there and no one tries to sell something. Just the right place.
It is a small pagoda with the remains of people in it and concrete panels on two levels around it explaining the story of the region during the Khmer Rouge horror.
At first I was not sure if it is appropriate to take pictures but my heart tells me that the dead would not mind.
This is the horror of all parents and somehow I feel that is the right picture to post. 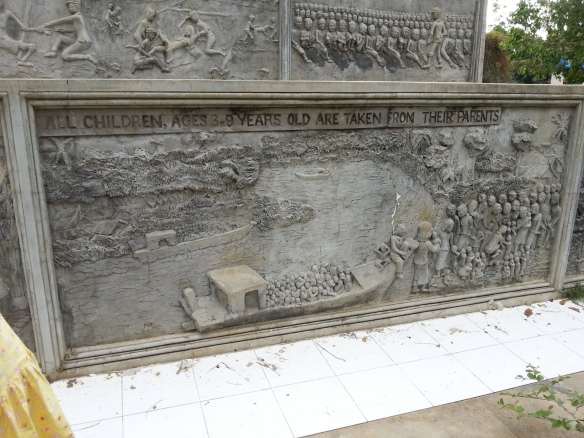 Reading about that strange and confusing time I am especially flabbergasted by the role some of the western governments played, supporting the Khmer Rough long after the Genocide was known to them. Shameful.

The inscription on the backside however ends with the words:
The remains of some of the victims of this genocide may never be recovered nor their murderers identified. But the gentle and forgiving Khmer, and energetic and optimistic people will not walk confidently through the will of shadows to reclaim their ancient culture and restore this beautiful land to become again the legendary paradise of celestial Apsaras.